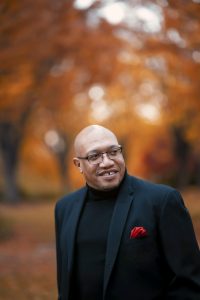 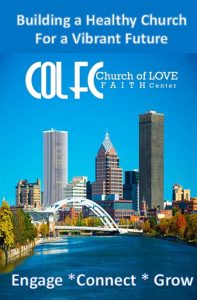 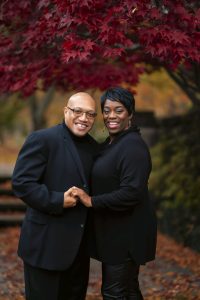 Pastor Terrance J. Youmans, a life long resident of Rochester New York, attended Edison Technical High School.  After graduating in 1988, he entered the U.S. Navy to help defend his country. Once his commitment to The U.S. Navy was completed, Pastor Youmans received a Liberal Arts Degree from Monroe Community College. He has also obtained a Master of Arts degree in Transformational Leadership from Northeastern Seminary.

Pastor Youmans was baptized at the age of 9 years old at the Antioch Missionary Baptist Church under the leadership of Pastor W.F. Cotton. He later rededicated his life to Christ in November 1993 and joined Church of Love Faith Center in December 1993 under the leadership of Bishop Gregory L. Parris. He believes his call in the ministry is to shepherd and inspire men, women, and children to become all that God has created them to be; and to instill in them a passion for Christ that would inspire others. He stresses that in order to receive direction from God we must be able to receive correction from God.  Pastor Youmans embraces his calling knowing that your reputation is made in a moment, character is built in a lifetime, the only preparation for tomorrow is the right use of today and that Jesus is a friend who walks in when the world has walked out. In his spare time he loves to read and exercise and perform voice over work, having the privilege to work with WDKX Radio station, The Henderson automotive family, The Dorschel Automotive group, Regional Transit Service, Xerox Corporation and The Mosaic Partnerships.

Pastor Youmans is married to Glenda Youmans and Liturgical Dance Leader. Glenda was ordained as an Elder on October 24, 2021. She is also a lifelong resident of Rochester and served in the United States Marine Corps. Together they have three wonderful children India, Terrance II, Olivia, and a granddaughter Ava. 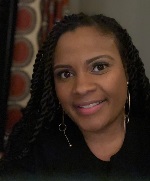 Our founder, Bishop Gregory L. Parris, heard that voice when he was living in Washington, D.C. God gave him a vision of a significant multitude of people, who are culturally  and generationally diverse. He knew that God would soon relocate him to the birth-site of this vision. Eight years later, Church of Love was born. Pastor L. Edith Parris opened her home for the first Church of Love Faith Center service  on Mother’s Day May 10th, 1981 to 12 adults and their children.. After “Greg’s “ union with Myra Plummer, she was installed as co-pastor soon after. They all served our ministry until they went on to be with the Lord.

Church of Love Faith Center was formed as....

a fellowship of believers in the Lordship of Jesus Christ. Our supreme desire is to know Christ and be conformed to His image by the power of the Holy Spirit. We are a non-denominational church, but not opposed to denominations as such.

Christian Worship
We aim to reflect brotherly  love, which is greater than any differences we possess.

Spiritual worship
We remain flexible and yielded to the leading of the Holy Spirit to direct our worship.

Inspirational worship
We give great place to music in our worship.

Intelligent worship
We put a great emphasis upon the teaching of the Word of God.

Fruitful worship
We look for His love in our lives as the supreme manifestation that we have been truly worshiping Him.

Word of God
We believe in the inerrancy of Scripture, that the Bible, Old and New Testaments, is the inspired, infallible Word of God.

Creator of All Things
We believe that God the Father is the personal, transcendent, and sovereign Creator of all things.